A little of what we learn does us good - pros and cons on pets.

Pets in apartments have been an emotive topic for years and, as a strata manager for over 18 years, I have had my fair share of debates about applications for and against having a pet(s) in apartments, approvals, refusals and complaints.

I have a husband, no pet and have no plans of having a pet anytime soon, though there have been some rumblings from my husband. We have a 9-year-old niece who tells us she is busting to get a dog. “Uncle Robert please, please buy a puppy. I promise I will look after it when I stay over.” She tried convincing Uncle Robert because my sister (her mother) and I said no.

I have not changed my mind about owning a pet, but my niece got me thinking. I read more on the subject and confess to having a better understanding of why pets are important to so many, whether they live in a house or an apartment and no matter whether they are an owner or a tenant.

I have lived in our apartment with my husband for the past for 25 years and in the early days requests to have a pet was usually followed by an unequivocal “no.” Were the majority saying no for “no’s” sake?

Things slowly changed and over the years residents in our block have made pet applications and had them approved. We have had dogs, cats, fish, birds, mice and the occasional lizard and, but for the very odd clean up, barking or meowing during severe thunderstorms and New Year’s fireworks, life has gone on as normal. I notice the non-owners with pets stayed longer, were more sociable and took an active interest in looking after the common areas including the garden.

Because of my pharmacy background I am a bit of a science nerd, I still read pharmaceutical, health and welfare magazines and articles. Through my reading I discovered that, according to the medical research, pets provide us humans many physical and emotional benefits.

Besides the occasional flee, pets bring the benefit of unconditional love. On a personal note, I can’t quite get used to them wanting to lick me or sit on my lap or jumping up on me because they are happy to see me. Seriously though I read and believe this unconditional love is one of the reasons they bring emotional well being.

On a more pleasant note, owning a dog assists people to socialize. I live between Bondi and Rose Bay and often come across dog walkers and have observed they are the ones who have a smile on their faces and often greet you with a “good morning” or “good afternoon.” I also notice that dog owners stop and speak with one another. This socialisation has been the subject of studies in many countries including Canada and Australia.

Though I mentioned dogs, it seems that felines also have brought health benefits including, it has been discovered, a reduction in the likelihood of a heart attack. Pets apparently also improve immunity and prevent allergies in young children and help their emotional development. Pets have also been shown to assist children suffering from autism and ADHD.

Research has also found a positive change in diabetes for people who have pets. See this link for more information.

Recently I returned from a trip to the UK and Ireland and, like New York and Paris, there seems to be a greater ownership than here of pets, particularly dogs. I have seen them in restaurants, cafes, on buses and trains and, of course, in apartments. I think we are in catch-up mode.

Some of the objections I have come across against pets in buildings is they scratch floors, chew carpets and sometimes have “accidents” on carpets or wooden floors. My personal experience is that this is rare. 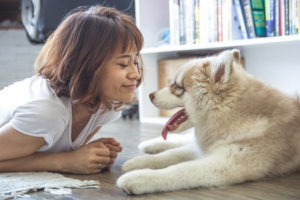 1. “subject to section 49(4) (of the Strata Schemes Management Act 1996) an owner or occupier of a lot must not without the approval in writing of the owners corporation, keep any animal on the lot or on common property.

2. The owners corporation must not unreasonably withhold its approval of the keeping of an animal on a lot or the common property.”

In compliance with a request for information, the tenants provided details relating to the dog including that it would be a puppy and be trained and that they had previous experience as pet owners and the puppy would not be left alone for extended periods.

The application to keep the pet was made in late January 2018 and in late March 2018, the scheme added Special By-law 12 which read as follows;

“You must not keep any animals on common property OR within lots. This includes, but is not limited to cats, dogs, guinea pigs, hamsters and birds.”

In early April the tenants were informed their application was refused for, amongst other reasons, “legitimate concerns.” The owners corporation declined mediation and the tenants brought their application to NCAT. The passing of the By-law in March, after the tenants application, was taken into account when the Tribunal made its finding. Without saying as much, the Tribunal must have regarded this as an 11th hour attempt to circumvent By-law 16, which was more broad. In any event, the subsequent by-law, because it followed the application, could not have retrospective effect.

The tenants argued the new By-law provided for a blanket prohibition and there were other owners who had prior approval to keep cats.

Section 157 provides NCAT the power to make orders relating to the keeping of an animal on common property. The section also provides that the Tribunal must not make an order unless it is satisfied:

1. The by-laws permit the keeping of an animal with the approval of the owners corporation and that consent cannot be unreasonably withheld; and

2. The owners corporation has unreasonably withheld its consent.

The test applied to whether consent has been unreasonably withheld is objective i.e. the test requires the existence of facts and circumstances, which is sufficient to induce that the state of mind in a reasonable person.

The Tribunal cited the case of Richardson v The Owners Corporation- Strata Plan No 56695 [2008] NSWCTTT 928 which dealt with the repealed Strata Schemes Management Act 1996.

The applicants seeking consent bear the onus on the balance of probabilities for making a case pursuant section 157.

A little of what we learn does us good. 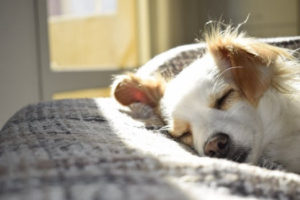